I draw inspiration from my education in psychology and my early training in weaving to explore the walls we build around ourselves. Those barriers range from the geological and architectural to our own formless psychological constructs. In object-based work representing these boundaries, I push the limits of my materials—cast concrete, marble, obsidian—through transformations that ask viewers to question their expectations about material integrity. I mix real with simulacra throughout my work: cast concrete reads as marble; rigid objects undulate; heft defies gravity. By juxtaposing high-end with commonplace materials, I make it difficult to tell the difference and challenge viewers to question their own assumptions and material hierarchies.

My series of Folds—cast concrete slabs scaled to my body at 66” long—bend like fabric or foam, eliciting curiosity about their rigid material make up. I cast each Fold by twisting and pushing pigmented, wet concrete into a urethane rubber mold. Then, using padding and ratchet straps, I push the sculpture into its final form before the concrete completely cures. The Folds’ scale, physical presence, and weight allow viewers to relate to each sculptural “body,” such that each being, boundary, or swirling surface comes alive. The obsidian boulders weighing down the marbleized surfaces seem to teeter uneasily, heightening the works’ sense of tenuousness.

In my most recent series of Bound Landscapes, I have shaped marble back into topographical forms that mimic the material’s source. Each hand-chiseled slab is bound in a cast concrete frame that also reads as marble. By framing ancient building materials mined from mountains within contemporary construction material, I draw attention to the ways in which humans attempt to harness the environment.

Our contemporary moment is marked by rigid boundaries that constrict us rather than connect us. By pointing to the value systems we impose to neatly categorize and understand our world as being culturally- or self- imposed, I aim to challenge and expand our frameworks of understanding. My aim, in all of my works, is that barriers—real, self-imposed, and imaginary—are set askew. 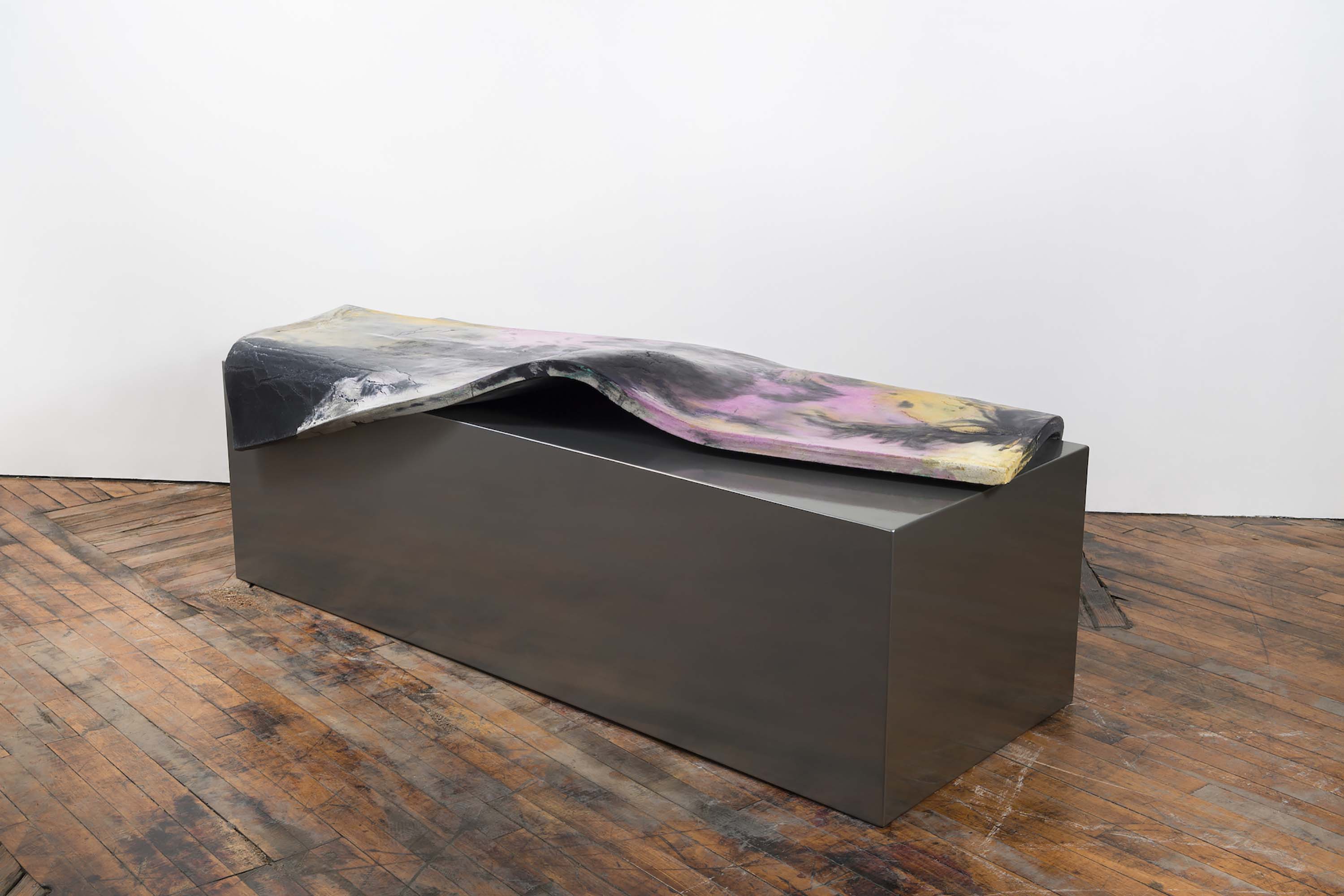 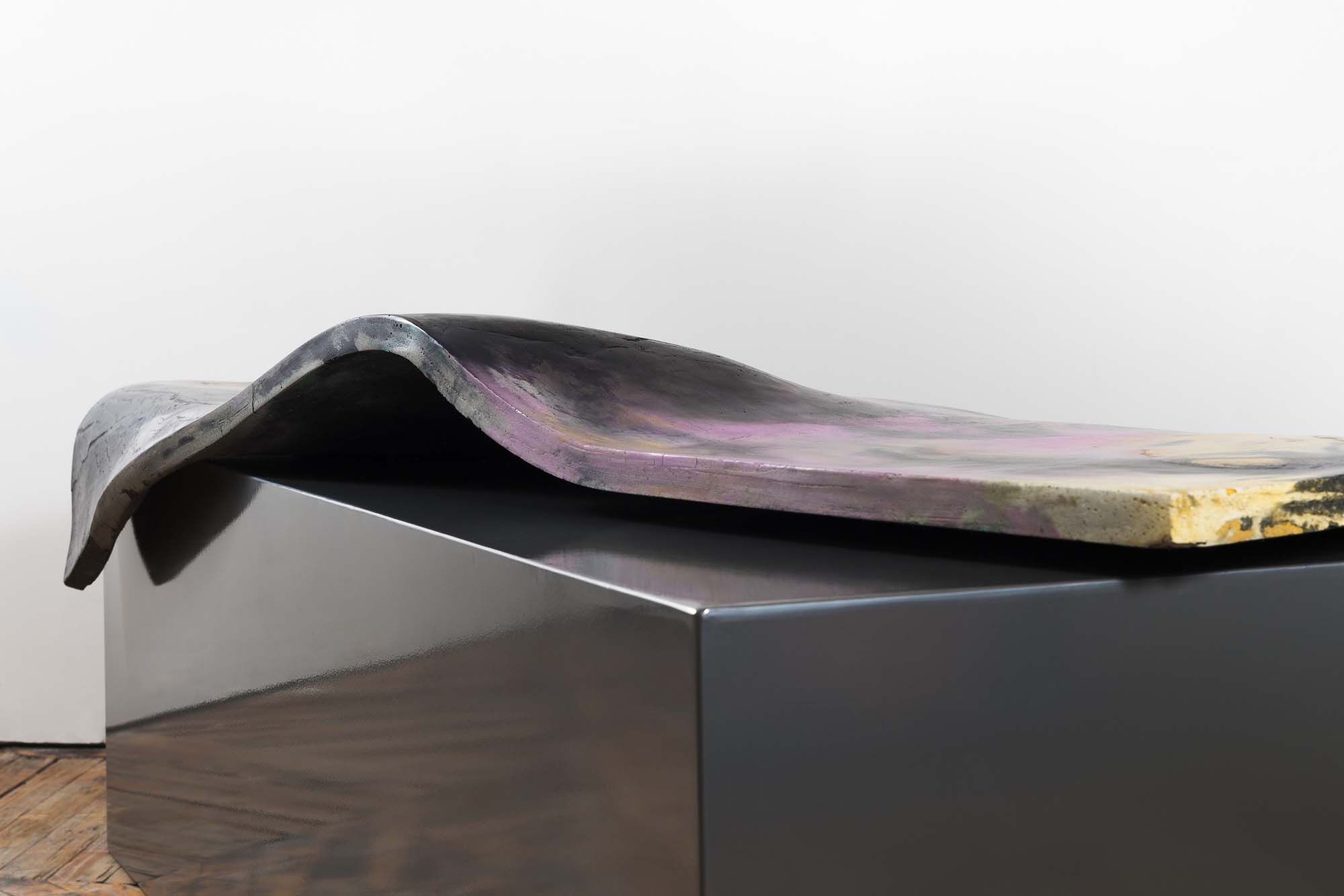 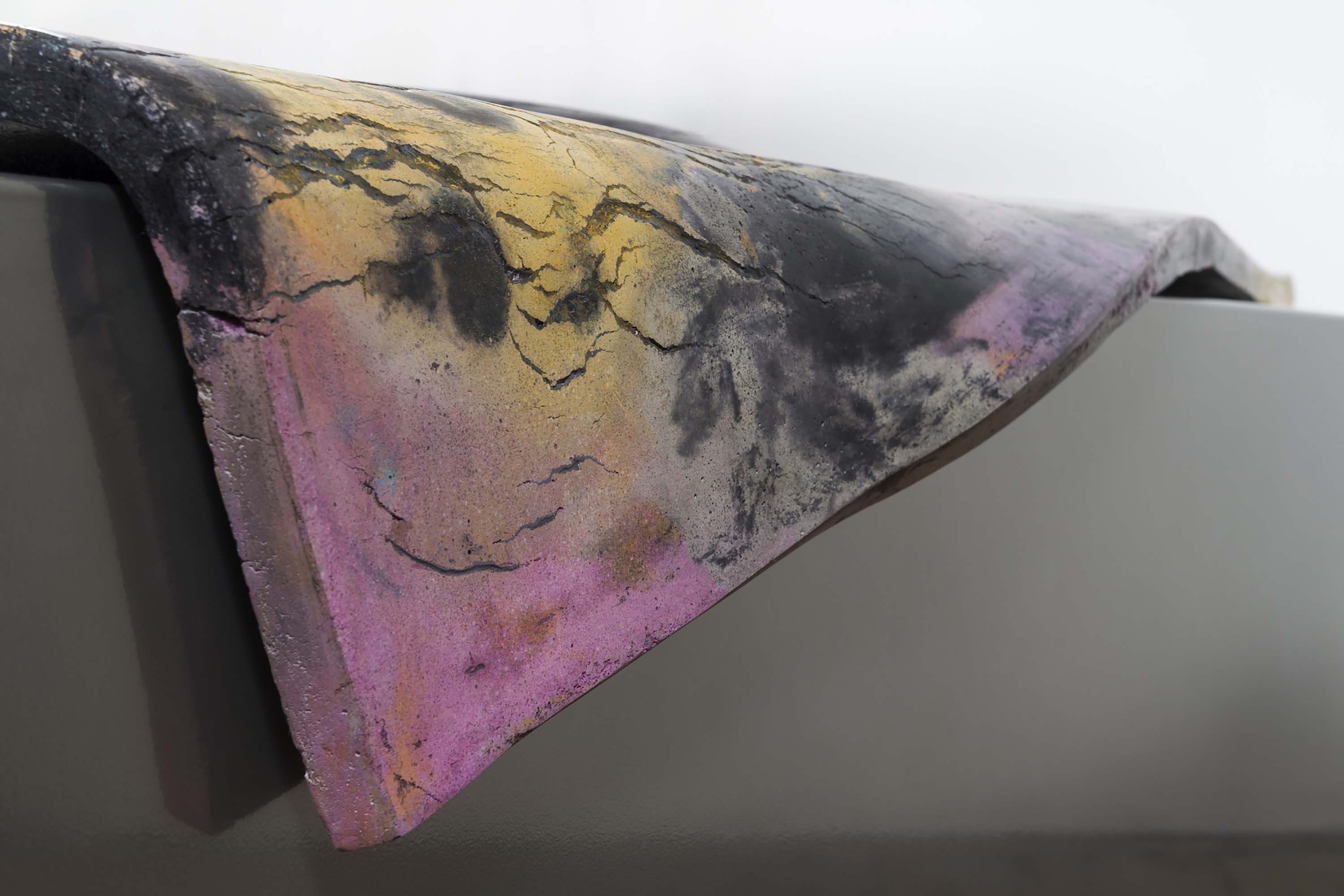 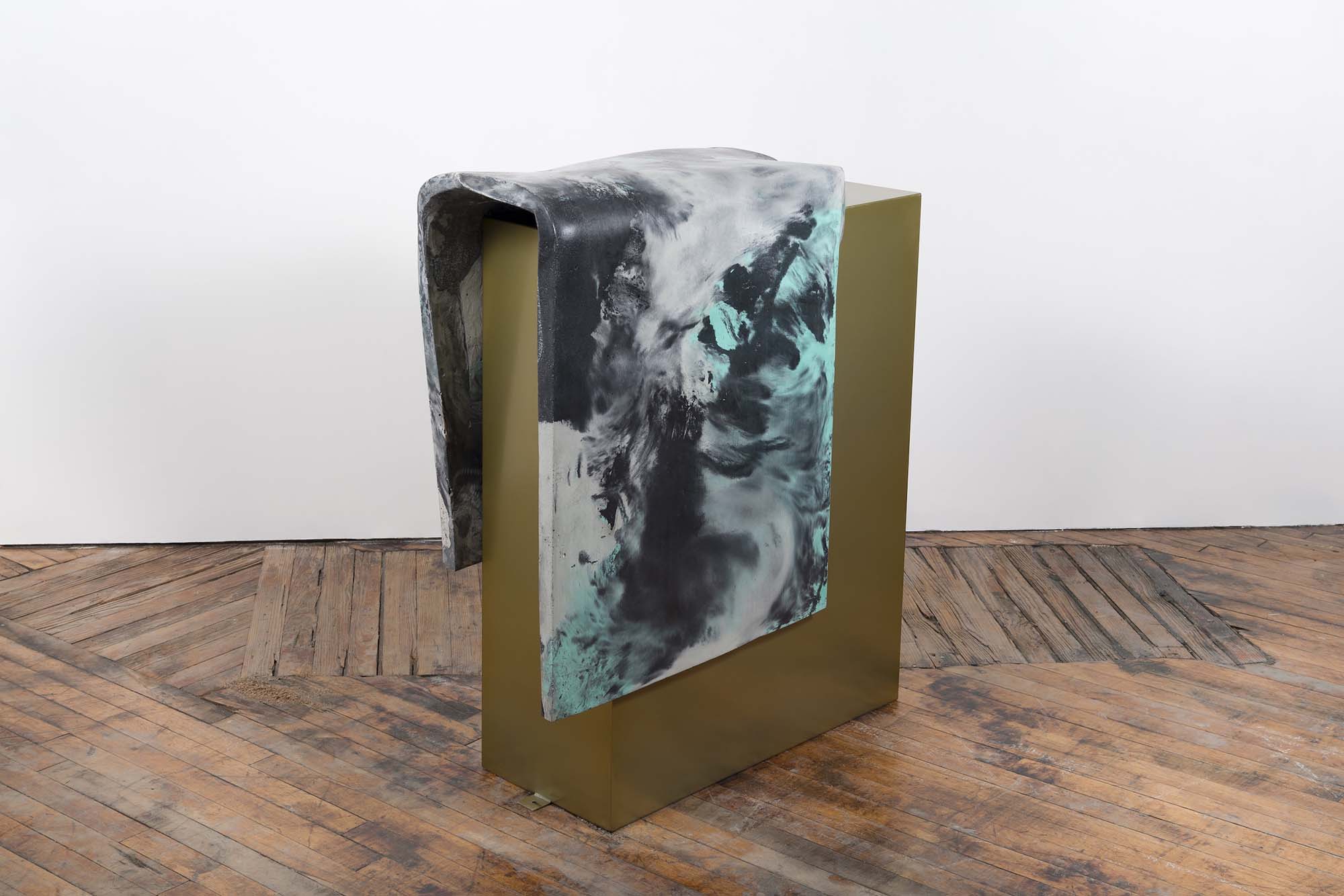 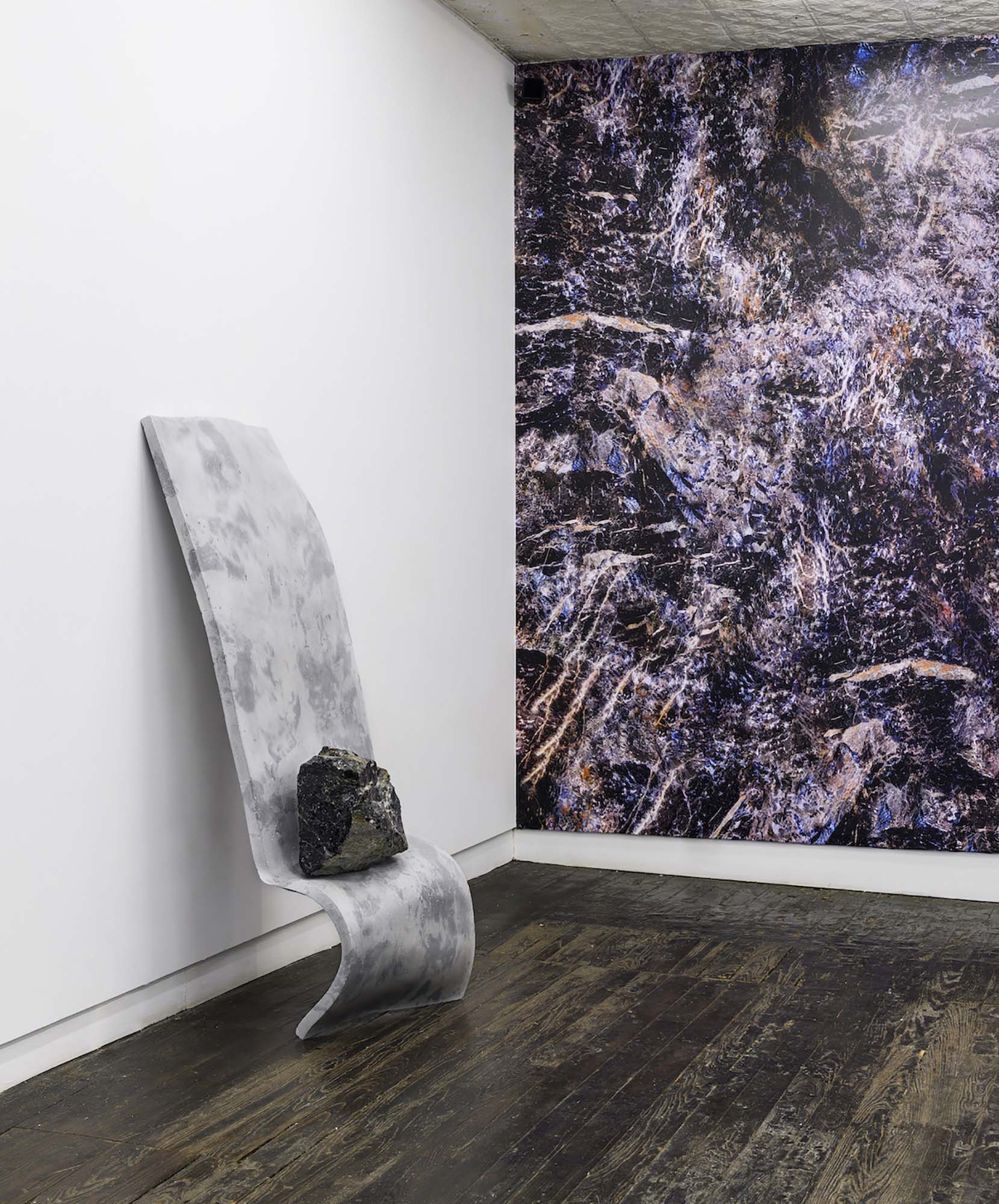 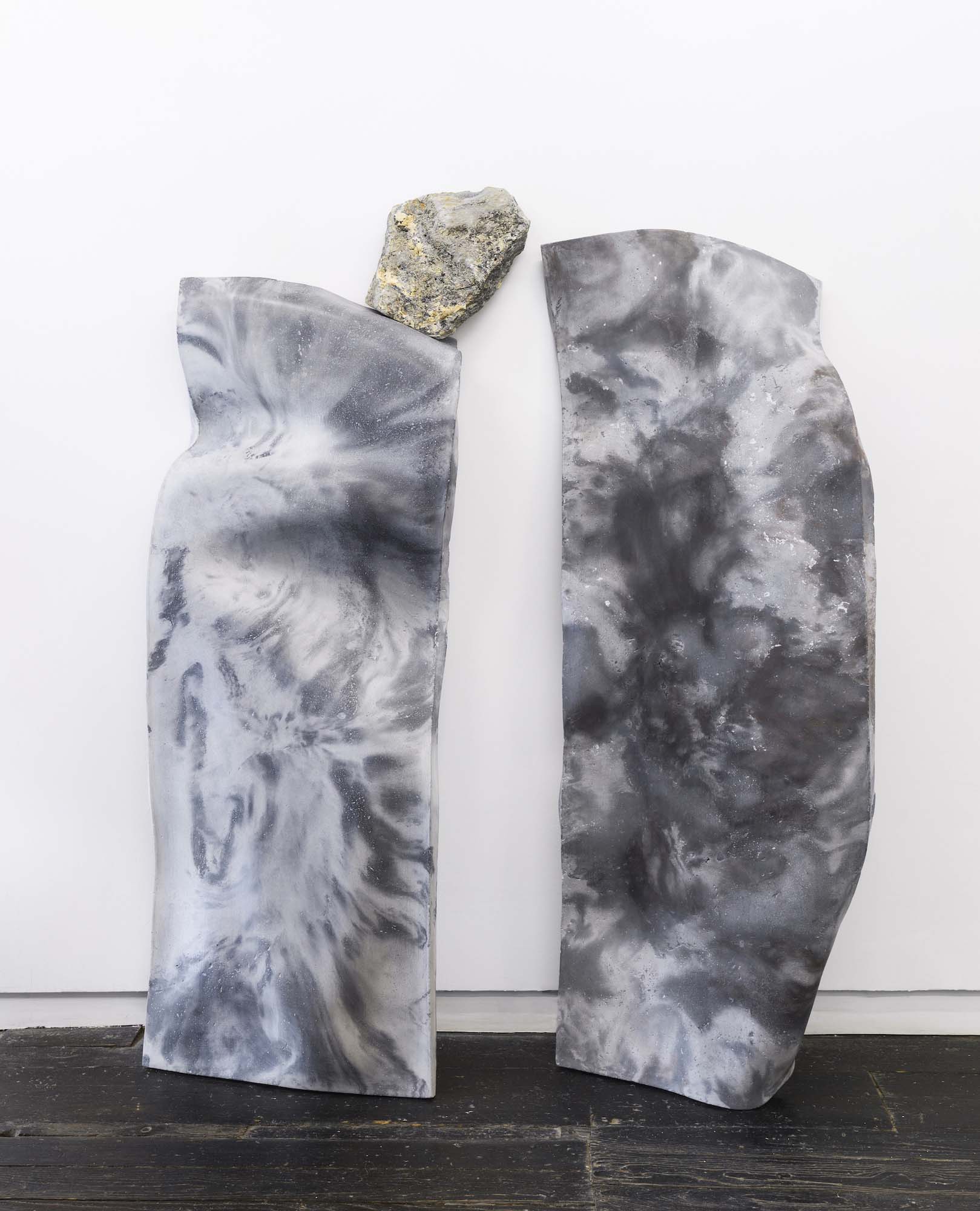 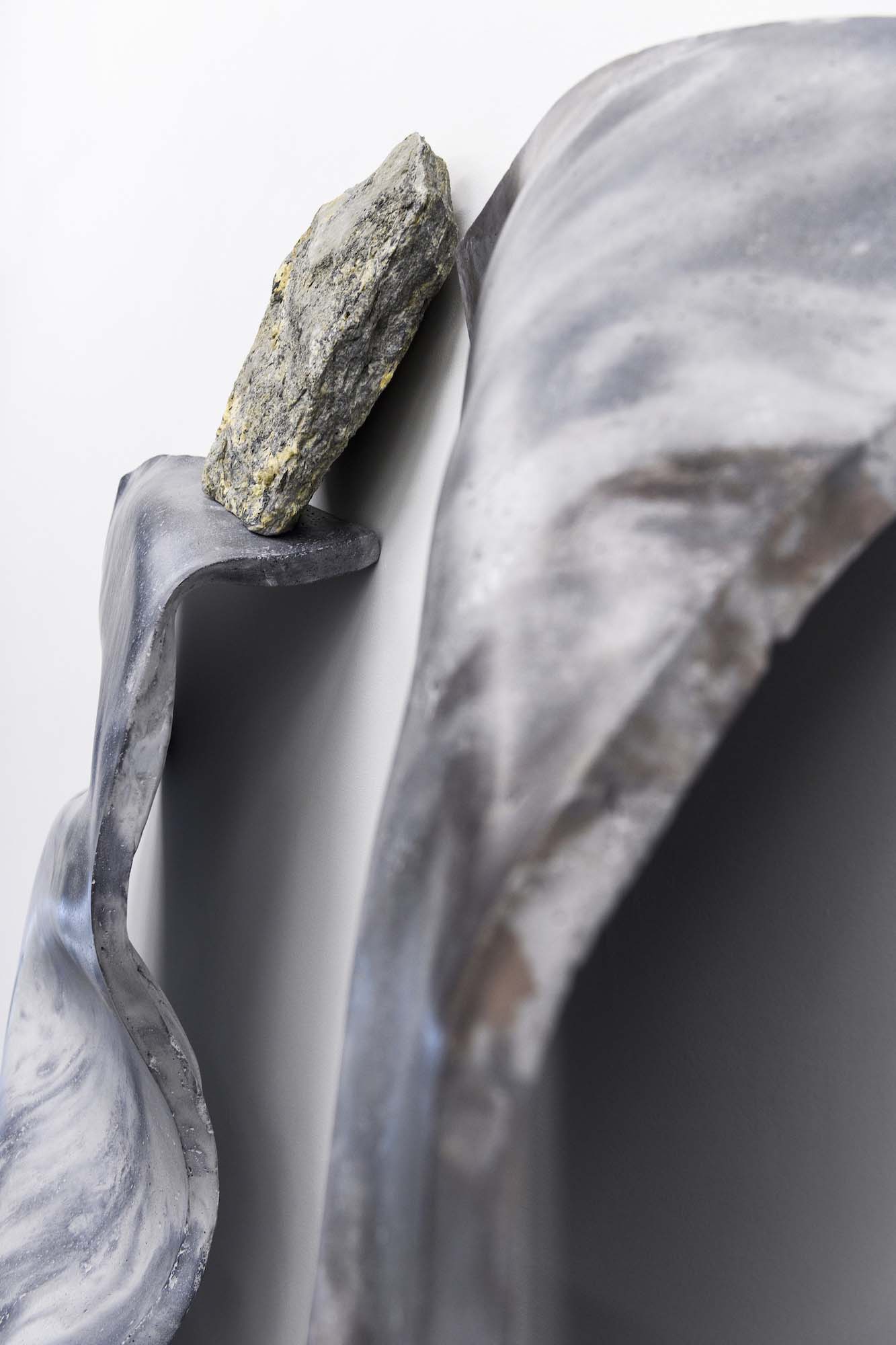 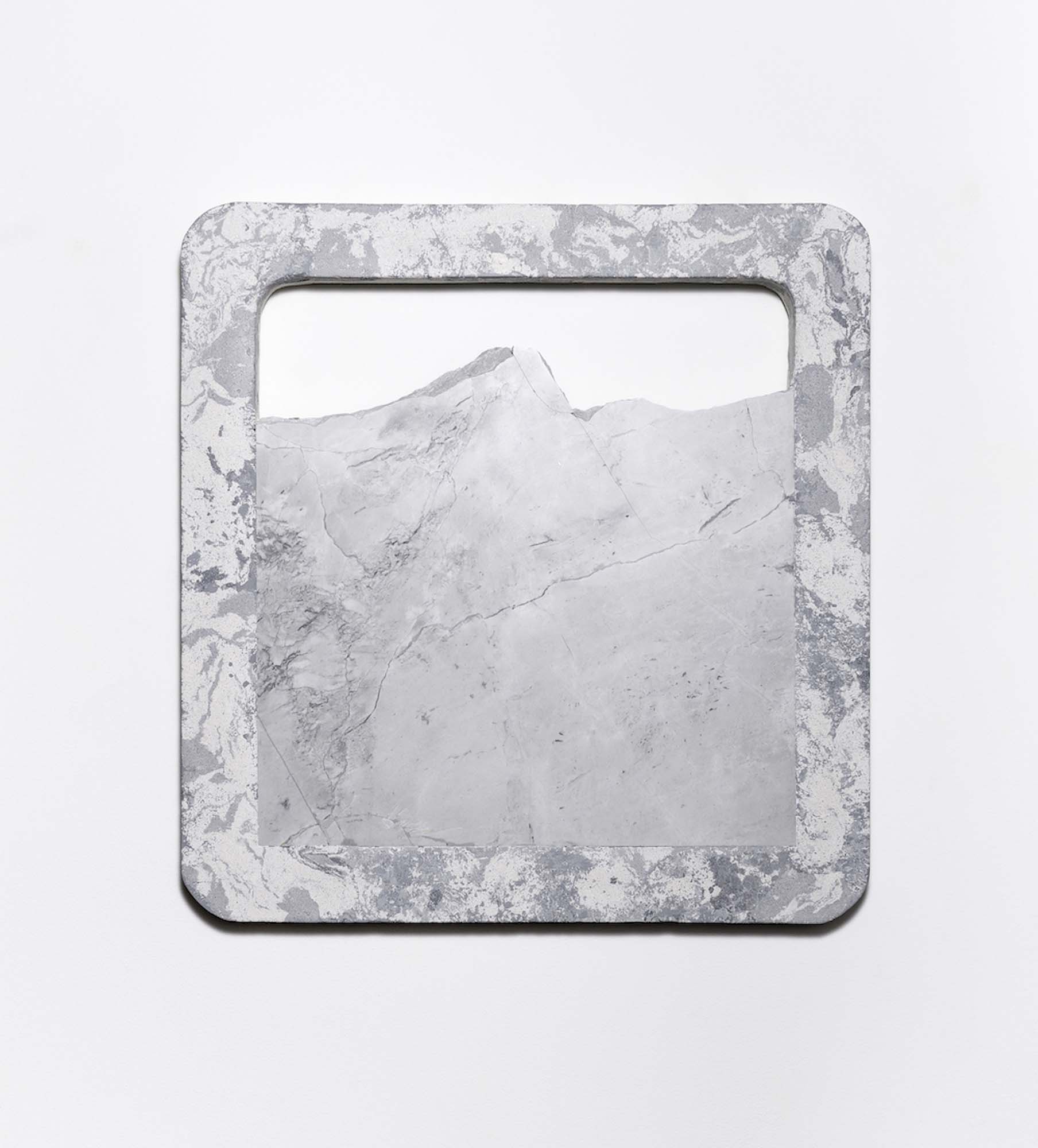 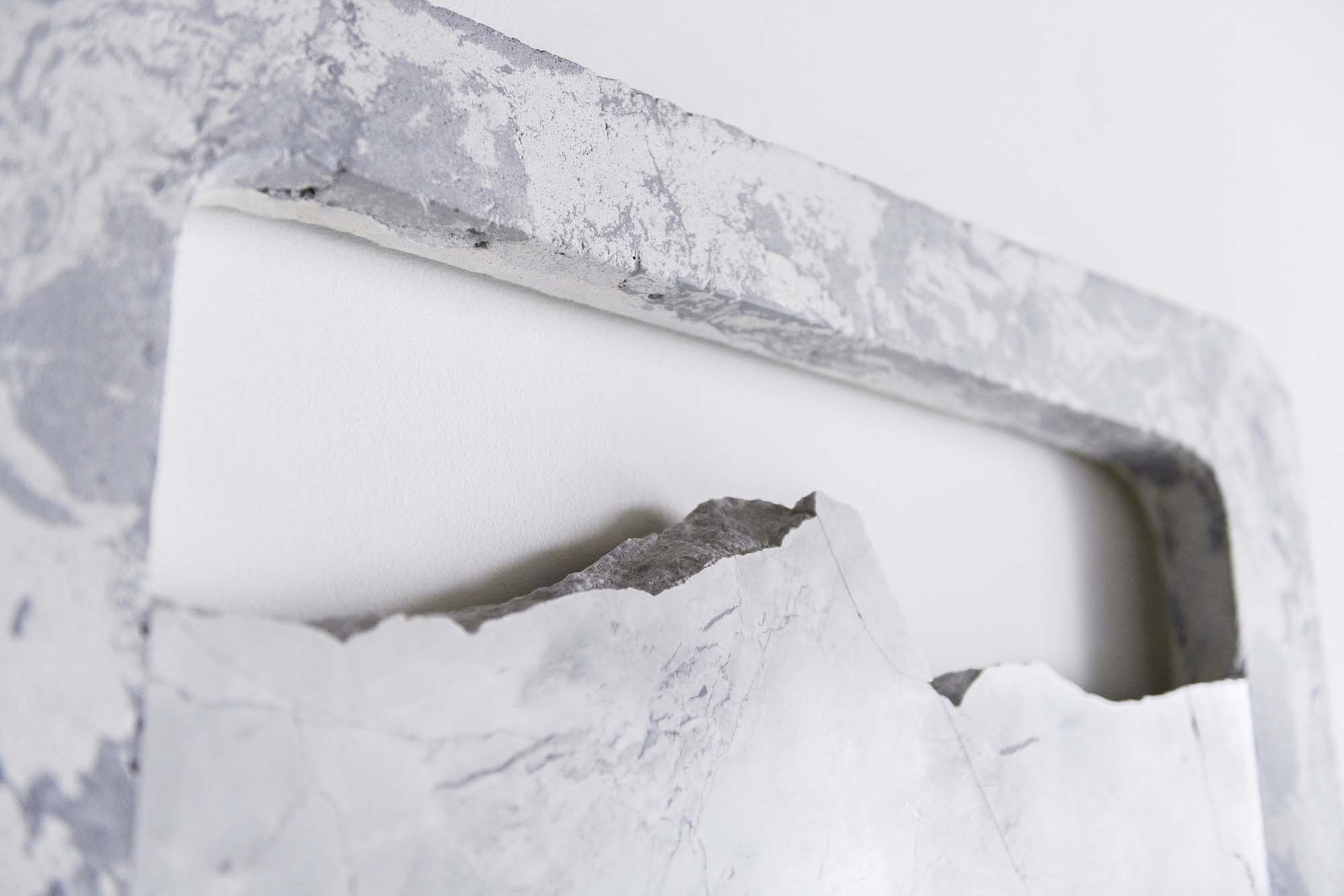 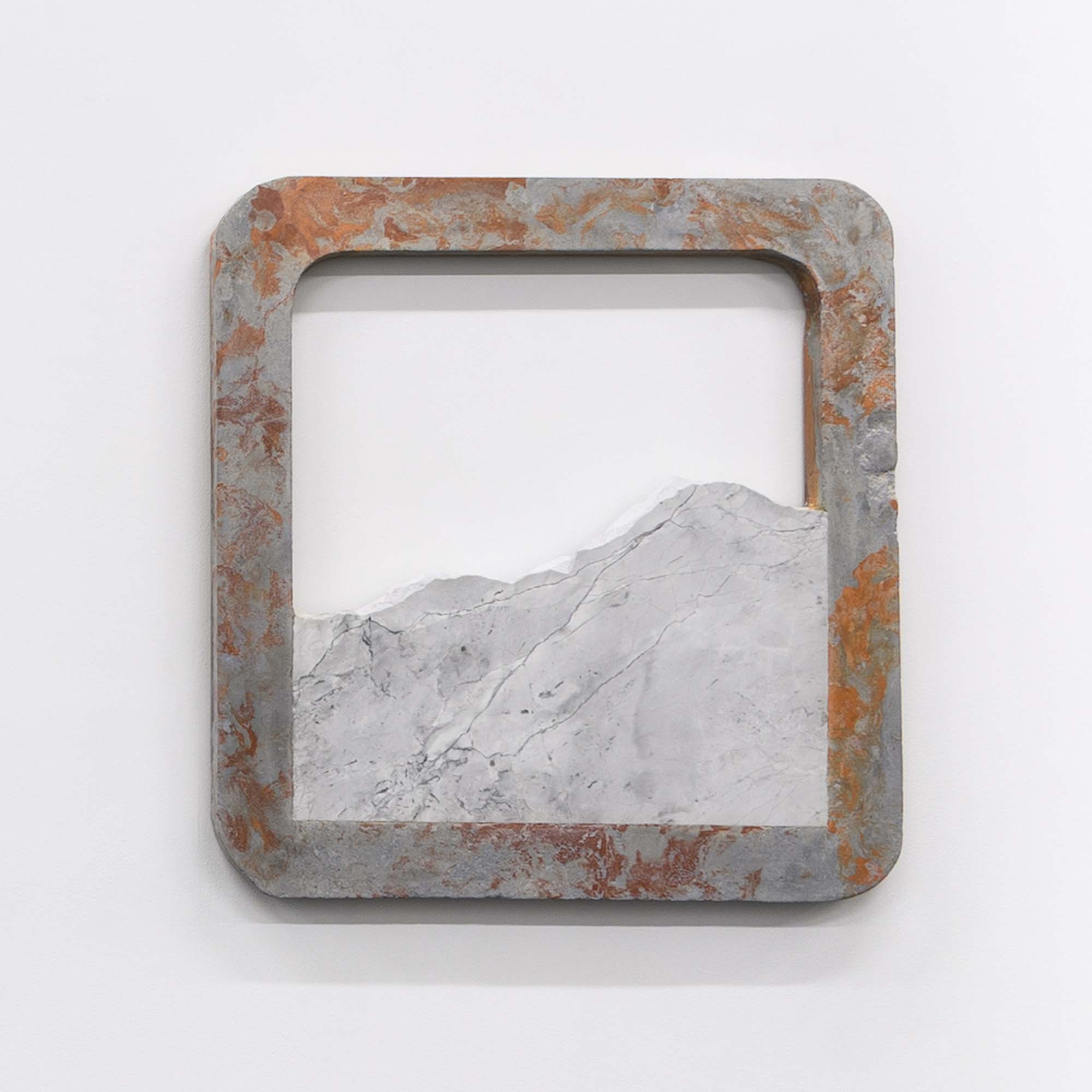 Rachel Mica Weiss (b. 1986) is a sculptor and installation artist based in Brooklyn, New York. Weiss earned a BA in psychology from Oberlin College, an MFA in sculpture from the San Francisco Art Institute, and she is a 2011 recipient of the San Francisco Foundation Murphy and Cadogan Fellowship. Solo exhibitions include Limits (2018) and Liminal (2017) at LMAKgallery, NY; Countermeasures at Montserrat College of Art, MA (2015); In Place at Fridman Gallery, NY (2014); and Engulfing the Elusory at the San Francisco Arts Commission, CA (2013). Weiss was also invited to be a resident artist at Lux Art Institute, CA, with a concurrent solo exhibition (2018). Selected group exhibition venues include: Wayne State University, Detroit, MI; Katonah Museum of Art, Katonah, NY; BravinLee Programs, New York, NY; Victori + Mo, New York, NY; and the Fiber Philadelphia Biennial, Philadelphia, PA. Residencies include Lux Art Institute, Marble House Project, chashama, and Vermont Studio Center. Weiss has been commissioned to create permanent, large-scale installations for the US Embassy in Bishkek, Kyrgyzstan through the Art in Embassies Program; Airbnb, Seattle, WA; Brookfield’s One Allen Center in Houston, TX; 1 Hotel Brooklyn Bridge, NY; The Ashland in Brooklyn, NY; and MediaMath’s 4 World Trade Center office, among others. Weiss's work is part of the Art in Embassies and Francis J. Greenberger collections as well as several private and corporate collections. Weiss’s work has been reviewed in The San Diego Union Tribune, The Boston Globe, and The San Francisco Chronicle and has appeared in Hyperallergic, Bad at Sports, Vice, ArtNet News, and on NPR. Her large-scale installations have been featured in Forbes, Interior Design Magazine, Dwell, and Surface Magazine. Weiss is represented by LMAK Gallery and Uprise Art in New York and is a member of Artist Pension Trust.