I have always been inspired by the female form, an interest which now finds itself relevant in the rawest sense in my latest project, ‘Birth Undisturbed’. I create fictional narrative scenes that bring primal, non-Western birth norms into cinematic modern tableaux using both historical figureheads and imagined characters. The series is informed by the works of influential and polemical birth writers, brought to visual life in the form of stories and metaphors to evoke the primal power of physiological birth. It is partly inspired by my own personal experience including the anticipated stillbirth of my first child, and then second healthy child, both whom were born at home in equally peaceful, undisturbed births. In my belief, the timeliness of the series is ever more appropriate in a global maternity and birth crisis where mothers of ‘normal’ birth regularly experience birth trauma; a calling for a rebalance of the power dynamic and honouring of a woman's mammalian instinct for privacy, to be 'undisturbed’ in the act of giving birth. The finished series will have 12 images, and every piece has a 5-7 min cinematic video.

In ‘Salle Sauvage’, a glass Cube in an urban landscape becomes a metaphor for obstetrician Michel Odent’s French term meaning primitive room, to depict a woman giving birth standing, in a powerful and yet curiously museum-like spectacle that hints, for one, at childbirth’s recent lift on censorship on social media in 2018.

In ‘The Whitechapel Woman’ staged in East London, a famous 1911 Victorian London memory of English doctor Grantly Dick-Read is visualised from a famous passage in his book Childbirth Without Fear, where he witnesses an easy birth by a destitute woman whose rejection of chloroform led to the eventual scientific discovery of hormones.

‘Ejection Reflex’ uses pre-Raphaelite and 1950s American reference to convey a scene that happens universally unnoted: a woman having a spontaneous birth on her doorstep, framed in nature by the red roses of her porchway, her husband symbolising the outer technological world she was on the cusp of entering.

In ‘Royal Blood’ we witness the last Royal homebirth of Queen Elizabeth II in 1964 to Prince Edward, born in the Belgian Suite of Buckingham Palace - the last of her four children, yet the first of her births to be active and conscious. It also spotlights the little known revelation that the Queen broke several traditions in Royal birthing history: to birth unobserved, and to have her husband, Prince Philip at her bedside.

In ‘The Creation of Man’ we experience the primal power of a birthing Virgin Mary in the physical act of crowning Christ, staged in a stable in Tuscany, a vision that has long eluded Nativity artists and which may be the first ever graphic interpretation in photographic fine art. It is an image that surprisingly has been met with more elation than controversy by many Christian mothers some who attest to have long searched for an image of Mary giving birth for their own visualisation in labour. 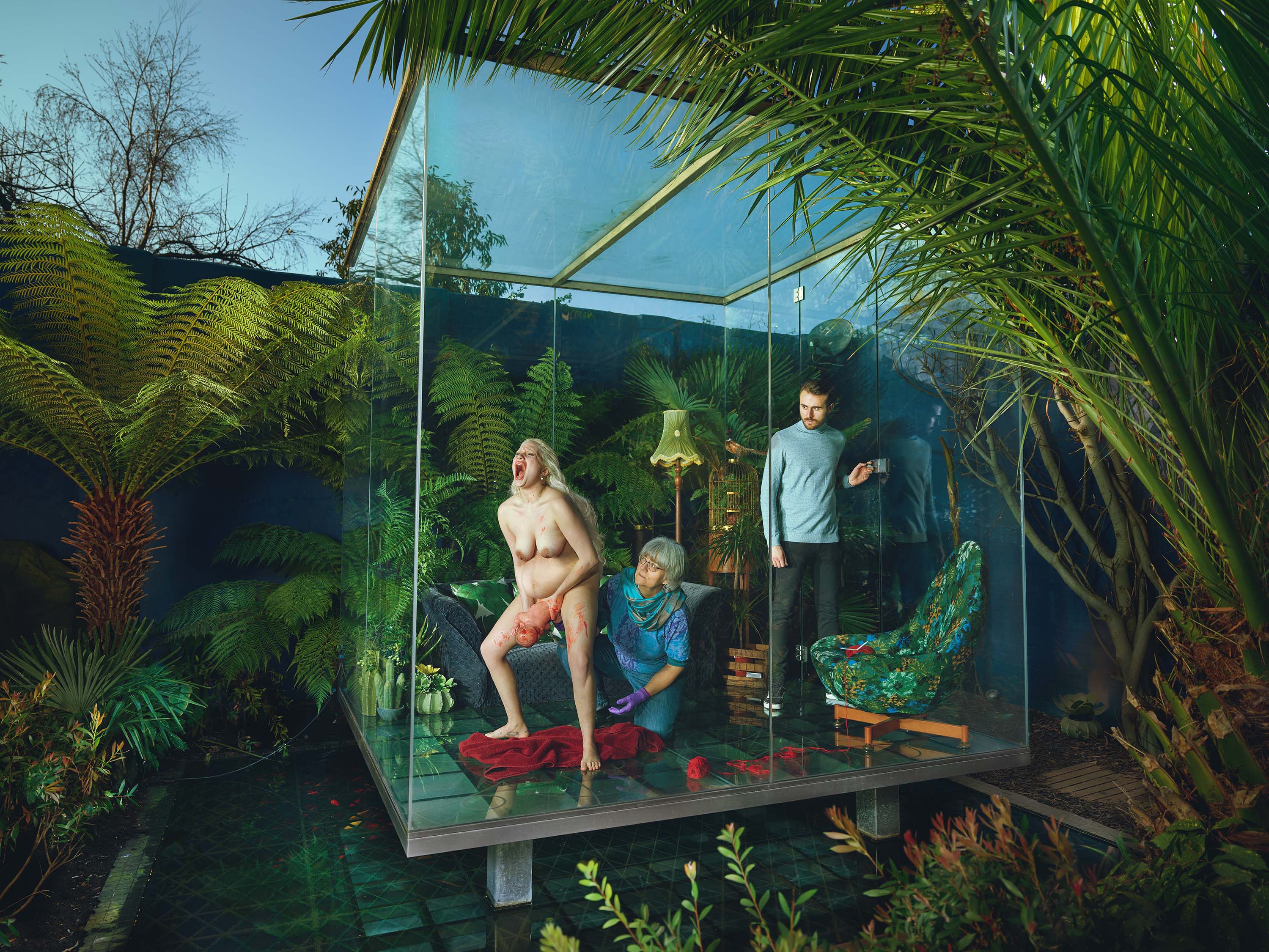 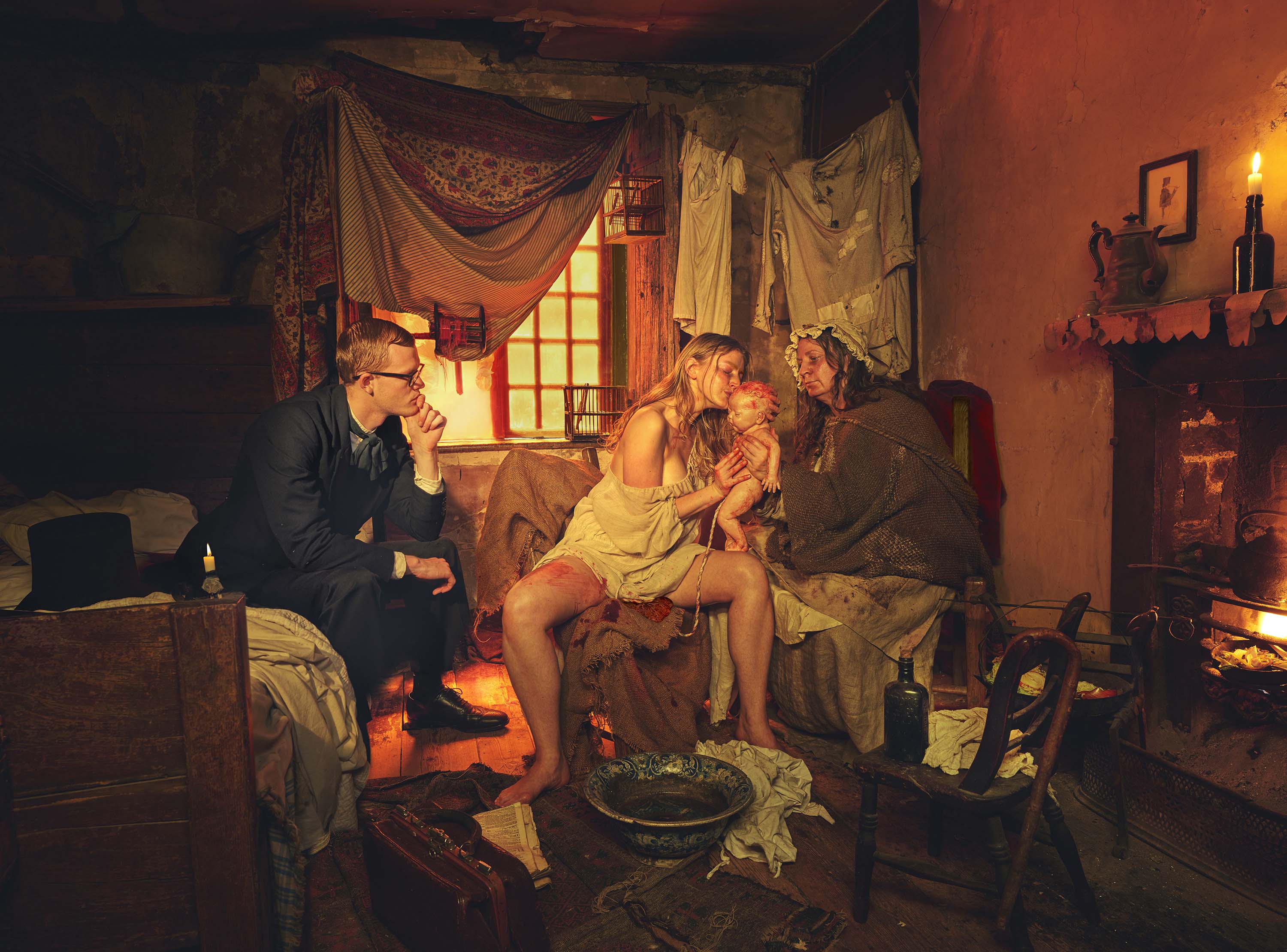 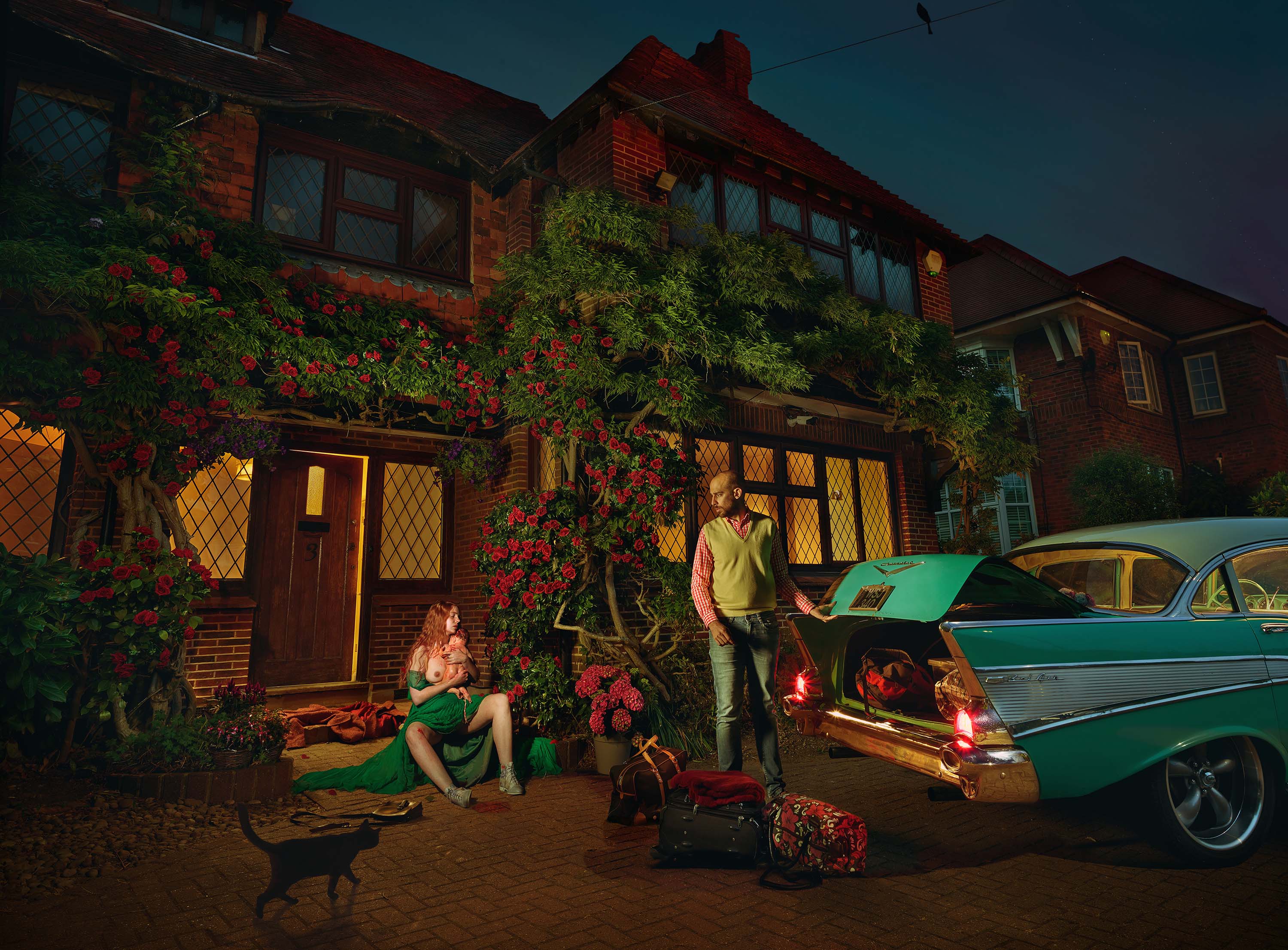 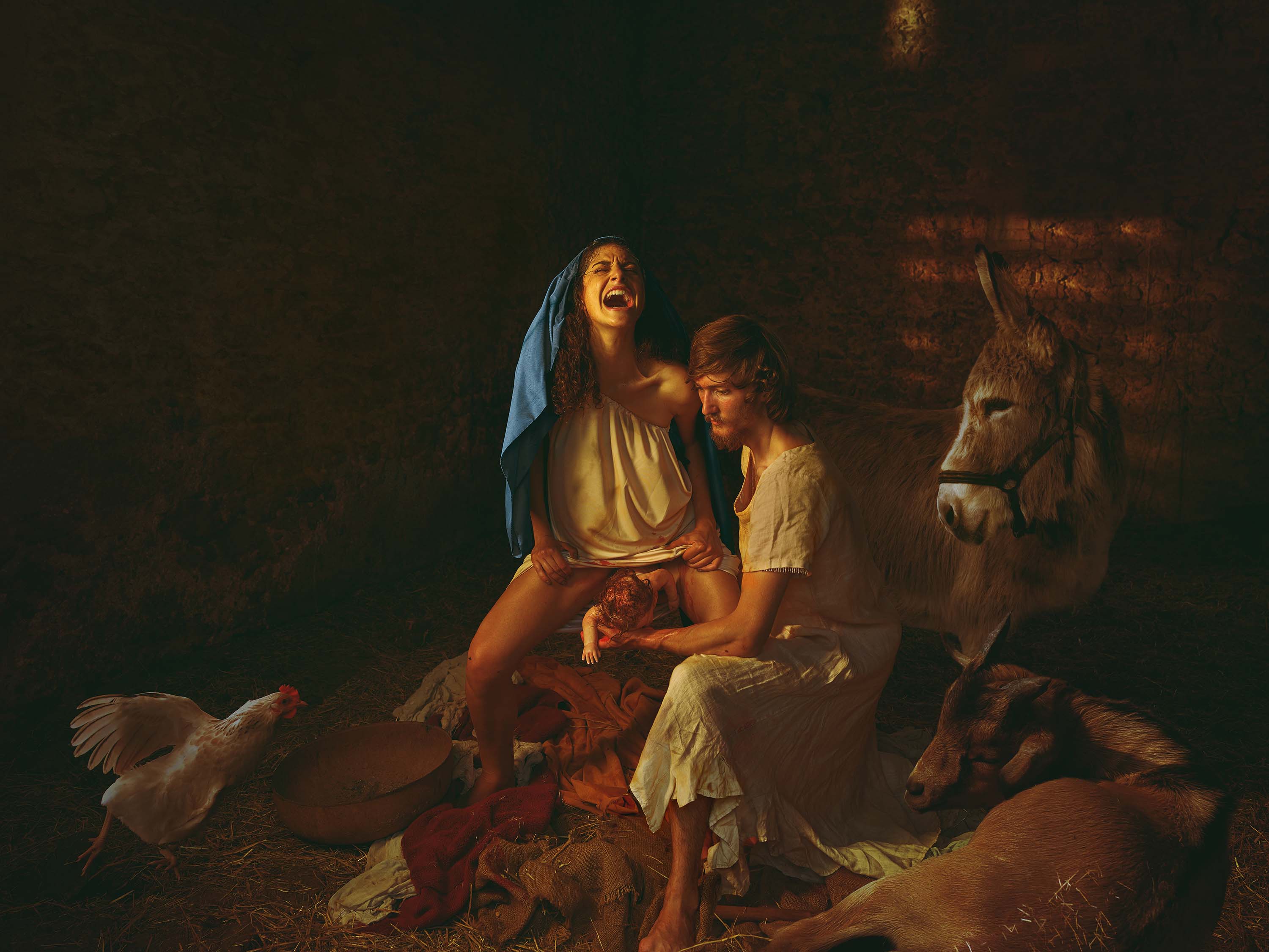 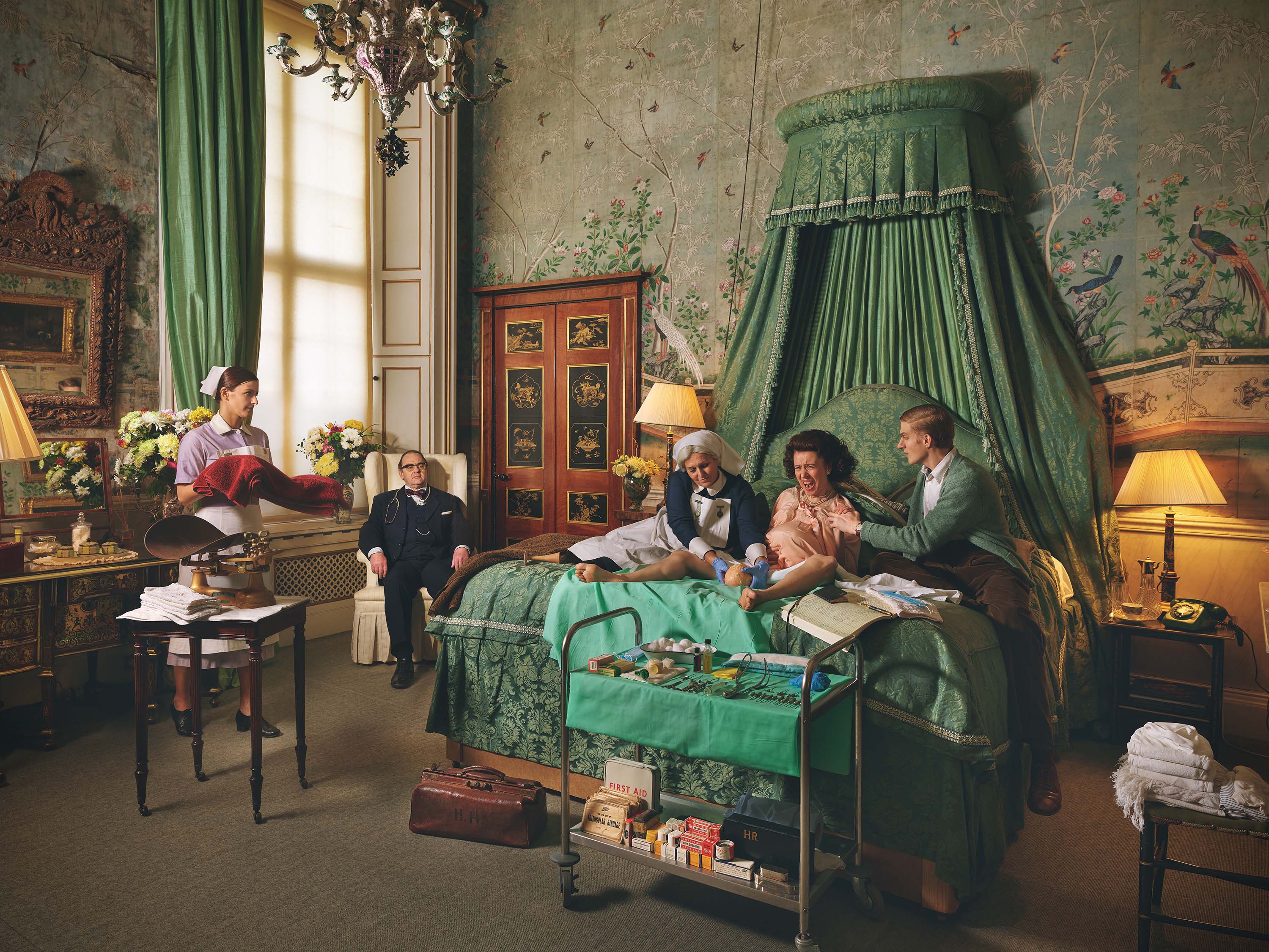 Natalie Lennard (b. 1986) is a fine-art photographer whose work has been exhibited in the Saatchi Gallery, Houses of Parliament, and Waldermarsudde Museum in Sweden, and featured in media worldwide including BBC, NY Arts, and El Pais. Originating as a self-portraitist in 2006, upon graduating in BA English & Media she was sought for solo art shows in London and Madrid, and invited to speak for Microsoft in the US. Her work of 12 years since has fused classical with modern, and fashion with fine art, to create an iconic, intricate balance of contemporary creativity. Her commercial clients include Nikon, HTC and large-scale art commissions for prestigious London restaurants Kai Mayfair and The Coal Shed, Tower Bridge. 'Birth Undisturbed' is her first major project to focus on a biosocial topic, with documentary video accompaniment, striving to usher the rawness of primal birth into the art world and Western consciousness. Highlighting key figureheads and writers from the realm of birth philosophy, the series' timeliness is ever more appropriate in a global maternity crisis.